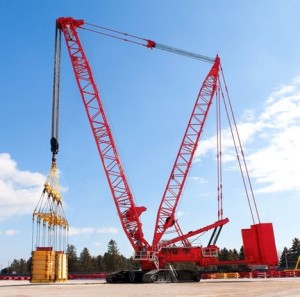 Manitowoc has completed the testing of its 650 tonne MLC650 crawler crane fitted with its variable position counterweight extension (VPC-MAX) attachment.

Increasing the MLC650’s capacities from 650 to 700 tonnes, the VPX-MAX features additional counterweight and a beam that automatically extends the counterweight beyond the rear of the crane depending on the weight of the load. As part of the load testing the crane boom was positioned in a number of positions, including over one corner of the crane in order to apply the maximum level of stress through the structure.

Dustin Soerens, Manitowoc marketing manager, said: “We attached hundreds of strain gauges to the MLC650 and picked a number of loads in the test yard to test its capacity with the VPC-MAX attachment. The testing went very well with no surprises. No changes are needed on the crane, as it performed superbly. We’re well on our way to releasing this innovative crane to the global market.”