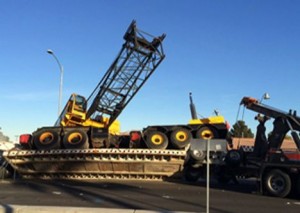 A five axle truck crane being moved across Las Vegas on a low loader partially overturned yesterday at a busy intersection. The superstructure of the crane, an American Hoist lattice boomed crane owned by Reliable Crane Service, appears to slewed over the side, causing the overturn. The counterweight landed on the road preventing a full overturn, and the crane remained firmly strapped on the trailer bed. Two wrecker trucks were called in to pull the trailer back upright and the street was opened again by evening. No one was hurt in the … END_OF_DOCUMENT_TOKEN_TO_BE_REPLACED 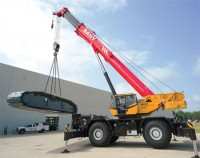 For Sany America, the US subsidiary of China's largest maker of construction equipment, 2013 has been a year worth celebrating. The Georgia-based company doubled its sales from last year and has fulfilled this year's budget profit by more than twofold. Its dealer network has expanded to cover about 65 percent of the US, Canada, and Mexico market, compared to 40 percent in 2012. There are now 32 dealers in 35 US states selling Sany products. The company introduced a new machine specifically designed for the North American market - an … END_OF_DOCUMENT_TOKEN_TO_BE_REPLACED 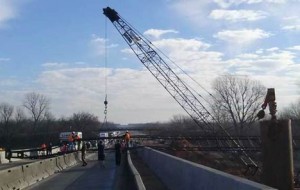 A lattice crane boom came down onto I-44/The Turner Turnpike near Stroud, Oklahoma – halfway between Oklahoma City and Tulsa- on Saturday. According to local feedback the incident was caused by a boom pendant cable failure to a crane working on a turnpike bridge. The boom was quickly removed from the road by another crane working on the same site. No one was injured in the incident, although a truck on the road sustained some damage. … END_OF_DOCUMENT_TOKEN_TO_BE_REPLACED 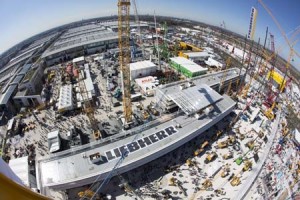 For the year 2013 Liebherr forecasts a group turnover of €9,086 million (US$ 12,539 million), equal to the 2012 figure. In the construction machinery and mining equipment segement the manufacturer anticipates a decrease of around 4 %. Turnover according to current forecasts will be around €5,620 million ($ 7,756 million, down €249 million ($ 344 million) on 2012. Included are the earthmoving, mobile cranes, tower cranes, concrete technology and mining divisions. Growth to compensate will be from turnover in the maritime cranes, aerospace and … END_OF_DOCUMENT_TOKEN_TO_BE_REPLACED 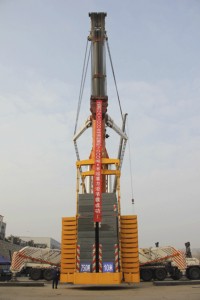 A 2,000 tonne capacity Zoomlion QAY2000 all terrain crane has completed overload testing on the testing ground at the Chinese manufacturer's Quantang Industrial Park. In late October a test was carried out giving a load moment of 6,000 tonne-metres, the manufacturer said. In November, another 750 tonnes was added to the test load, increasing the load moment to 7,500 tonne-metres, the manufacturer said. The 9-axle all terrain crane, which has an additional three axle auxiliary drive unit, weighs 325 tonnes. It was first shown at the Bauma … END_OF_DOCUMENT_TOKEN_TO_BE_REPLACED

China will have a “more targeted” new wave of urbanization in contrast to infrastructure spending in 2008, according to Alexious Lee, a senior investment analyst with CLSA. A rise in demand for machinery is expected after two years of decline as local governments look to complete projects. Lee says there is “more commitment to connecting infrastructure. China demand will be excavator-centric over the next two years”. More work in or near cities – rather than on highways – will also see increased demand for higher quality products (in … END_OF_DOCUMENT_TOKEN_TO_BE_REPLACED