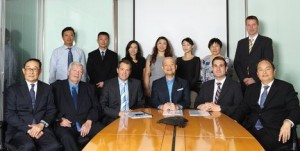 Liebherr Biberach has completed the acquisition of the Shriro tower crane division from the Shriro group in Hong Kong. The deal is an asset based transaction and includes 24 tower cranes, with 20 sales and service staff, all of whom have transferred to the new Liebherr distribution operation. The business will report into Liebherr-Singapore which will now be responsible for the Liebherr tower crane business throughout Asia. The Shriro Group has had close ties with Liebherr since 1978 when, under the name Peninsula Engineering & … END_OF_DOCUMENT_TOKEN_TO_BE_REPLACED

Dutch engineering contractor Gebr. De Koning has taken delivery of the first 100 tonne Hitachi-Sumitomo SCX1000A-3 lattice crawler crane in the Netherlands. Purchased through Hitachi (Europe), the SCX100A-3 lattice crawler crane can be rigged with up to 60 metres of main boom, or a combination of boom and 28 metre jib for a maximum system length of 79 metres. Powered by a stage IIIB complaint engine, the new crane has been ordered with an additional winch and a wider skywalk on its main boom for enhanced safety and easier assembly. The crane … END_OF_DOCUMENT_TOKEN_TO_BE_REPLACED 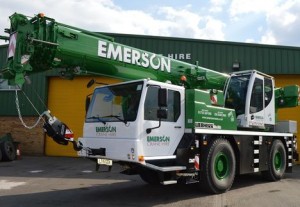 UK rental company Emerson Crane Hire, has taken delivery of the first of two new 40 tonne Liebherr LTM1040-2.1 two axle All Terrain cranes. The new models are equipped with a new style front bumper more in line with other Liebherr All Terrains, and also features the latest operator cab, with improved comfort and visibility. Disc brakes are also now a standard on this model, which according to Liebherr give better braking efficiency and lower maintenance costs. The units are also equipped with the latest Mercedes stage 4 final engines and … END_OF_DOCUMENT_TOKEN_TO_BE_REPLACED

UK based rental company Weldex has taken delivery of four new Kobelco CKE G series crawler cranes as part of its ongoing fleet modernisation programme. The company purchased two 60 tonne CKE600G machines and two80 tonne CKE800G cranes which will be based at the company’s depot in Derbyshire, England. The CKE600G israted at three metres and can handle seven tonnes at 12 metres radius on its 51.8 metre maximum boom. The CKE800G will take seven tonnes out to 20 metres with its 55 metre maximum boom length. The new cranes also feature low … END_OF_DOCUMENT_TOKEN_TO_BE_REPLACED

A mobile swing cab industrial crane overturned last week in Balzers, Lichtenstein, while picking & carrying a large concrete panel. The crane an 18 tonne Bollhalder Bakran 90, with an articulated boom, owned by Autokran Ag Rheintal was travelling close to an embankment leading down to a stream when the swinging load took the crane over sideways. Fortunately the operator was unhurt. And quick action by the fire service managed to prevent any serious contamination of the stream. The crane an 18 tonne Bollhalder Bakran 90, with an … END_OF_DOCUMENT_TOKEN_TO_BE_REPLACED 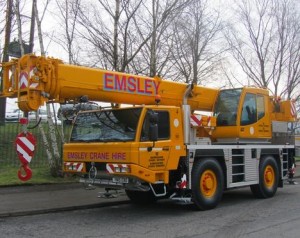 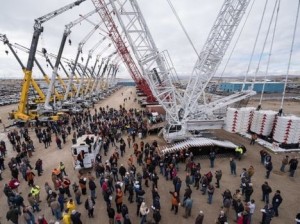 The Energy Crane auction in Casper, Wyoming, yesterday raised over $54 million, a new record at Ritchie Bros for a single owner sale. The sale included 38 cranes, which fetched over $35 million. Around 3,000 on-site and online bidders competed to buy the cranes and transport equipment. Highlights of the auction included a 500 tonne 2010 Liebherr LTM1500-8.1 All Terrain that fetched $3.35 million—the most expensive All terrain Crane sold by Ritchie Bros. to date. Ritchie Bros chief executive Ravi Saligram said: "Our extremely … END_OF_DOCUMENT_TOKEN_TO_BE_REPLACED 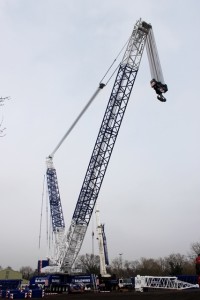 UK rental company Baldwins Crane Hire has taken delivery of a 750 tonne Liebherr LG 1750 lattice boom truck crane for its heavy crane division. The LG 1750 combines the superstructure, booms and jibs from the LR 1750 crawler crane, with a compact eight axle 16x8x16 chassis. Liebherr GB managing director Richard Everist said: “Baldwins are well established in the heavy crane sector and already have an impressive fleet of Liebherr cranes. The addition of the LG 1750 takes their capability to a new level and we are delighted to support their … END_OF_DOCUMENT_TOKEN_TO_BE_REPLACED 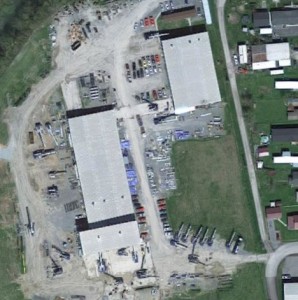 Tadano is investing $2.5 million to expand its Mantis crawler crane plant in Richlands, Virginia, adding at least 25 new jobs. Mantis is based in Franklin, Tennessee, and apparently considered adding capacity in either of its two locations, but chose Virginia which offered a number of grants and other financial aid. The announcement of the expansion was jointly made by Virginia’s governor Terry McAuliffe and Tadano’s Shiro Morita. McAuliffe said, “I am thrilled to announce this win for Tazewell County, creating 21st century jobs in … END_OF_DOCUMENT_TOKEN_TO_BE_REPLACED