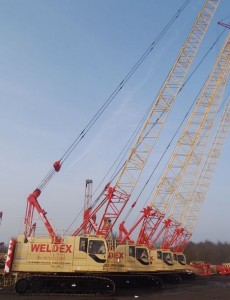 Weldex chief executive Dougie McGilvray said: “We have 120 cranes with an average age of four and a half years. They are all new and that is the way we want to keep it. The company aims to replace all of its machines every eight years. That is why we are working with Kobelco to update and modernise our fleet.”

“We do a lot of work within London area so we are looking at upgrading our fleet to all 3B compliant machines. The cranes will be working on Crossrail and the new Thames Tideway Tunnel as well as carrying out general construction work in London and all over the UK.”

Mark Evans sales manager Kobelco Cranes Europe added: “We experienced major growth throughout 2014 but this year is set to be even better with our first quarter sales outperforming the same period last year by a long way”.