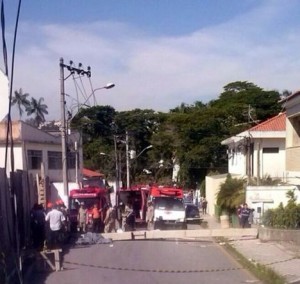 A 20 metre steel I-beam slipped from a mobile crane in Barra Mansa to the south of Rio de Janeiro, Brazil last month killing an elderly pedestrian.

The beam – part of a steel building – was being lifted by a Sany truck crane owned by the rental company Jocar, when its slipped out of the slings and dropped into the street below. It landed on a woman, Orecina Marta de Souza, 79, killing her instantly.

The incident occurred on Friday the 13th as she walked past the construction site – a hotel – with her son when it happened. He was also injured in the incident.