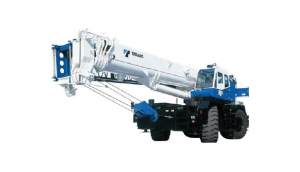 Tadano has reported its nine month results, which show revenues up 15 percent for the year, while profits have risen more than 43 percent.

Total revenues for the nine months were ¥145.1 billion ($1.2 billion), 15 percent higher than last year, which was made up principally as follows:

Geographically sales for the period – all products – were up 24 percent in Europe, 23.5 percent in North America, 38 percent in South and Central America and 44 percent in Asia, while the Middle East was virtually flat and Australia/Oceania declined almost 19 percent.

The company said: “The Japanese economy recovered at a gentle pace during the period under review. Personal consumption and production trended toward recovery. Reaction to the consumption tax hike weakened, while corporate earnings and capital investment remained largely unchanged. Falling crude oil prices and other factors have recently contributed to a sense of uncertainty. Within our industry, driven by factors including earthquake restoration and recovery, disaster preparedness and mitigation, and efforts to address an aging infrastructure, increasing utilisation rates in the Japanese market resulted in a perceived shortage of cranes. Demand grew, backed by rising prices and improving business confidence after the decision to hold the 2020 Olympics in Tokyo.”

“Overall demand fell outside Japan, with some regional variation. Demand fell in North America and Australia, remained largely unchanged in the Middle East, and grew in Europe and Asia. Sales outside Japan increased 11.2 percent, thanks to company efforts that focused on expanding sales of larger products and on capturing demand related to plants and infrastructure.”

Another solid result from Tadano which is making good progress in sales in North America and parts of Europe. The company is building a solid following for its All Terrains worldwide and its Rough Terrain cranes in the USA where they are gaining an increased following, in spite of strong competition from the well regarded locally built products.

Tadano still lags the three other major manufacturers in terms of marketing and distribution, and even brand awareness, but the quality and reliability of its products is winning it a lot of repeat business. This year it is planning a host of new All Terrain cranes, including 70, 100 300 tonne models and possibly a new larger crane, rumoured to be in the 700 tonne region.