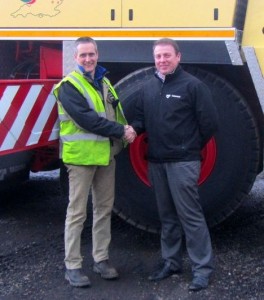 The five axle machine features a 60 metre main boom plus an 18 metre bi-fold swingaway extension. The all wheel steer crane can carry up to 21.7 tonnes of counterweight on the road, within the UK’s STGO category C, and comes with heavy duty 3.8 metre off-settable extension, capable of lifting up to 40 tonnes. Intended for refinery work the crane has also been fitted with AMOT engine shutdown valves.

Quinto owner Oliver Arnold, who took over the company last October, said: “We looked closely at the range of 130 tonne machines on the market. We chose the Tadano based on performance and specification. This crane adds to the ATF 90G-4 we already run in the fleet and the early impressions have been such that we have ordered another unit.”

Quinto has a fleet of cranes and aerial work platforms operating from seven depots servicing East Anglia, the East Midlands and Greater London. It has also recently added a demolition and dismantling division.