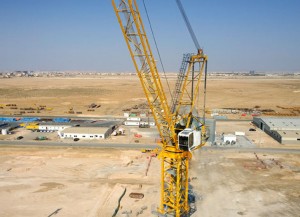 To reach these heights the cranes will move upwards in several climbing stages. They will be positioned on the sky terrace of the building or on various cantilever platforms mounted on the outside of the building.

According to Liebherr, the positive experience contractor Saudi Bin Laden Group has had with its cranes on other projects were one of the main reasons for their use on the Kingdom Tower. For example, two 280 HC‑L cranes were used on the CMA Tower in the King Abdullah Financial District project in the Saudi capital, Riyadh.

The Kingdom Tower will be the first structure in the world to be over 1,000 m high. It will also have the highest ever visitor viewing platform at a height of 630 m. The skyscraper with 170 storeys is part of the “Kingdom City” urban development project in the north of Jeddah in Saudi Arabia.