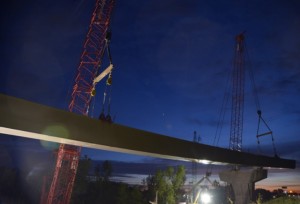 Four Manitowoc 2250 crawler cranes were featured prominently in the assembly of several new overpass bridges as part of a $61 million highway project in Wisconsin. The work also included the expansion of highway U.S. 41 traffic lanes, the reconstruction of several of its interchanges and the addition of 40 roundabouts. Dawes Rigging & Crane Rental of Milwaukee handled the lifting work.

“The 300-ton capacity cranes were just what we needed for the large pick weights associated with many of the lifts, especially the prefabricated tub girder structures that weighed up to 120 tons,” said Scott Jerome, senior branch manager, Dawes. “The Manitowoc crawler cranes exceeded our expectations and were the right crane choice for the project.”

The cranes’ 330-foot main booms were crucial to the lifts, raising loads above and across several traffic lanes and other road construction equipment to carefully position them on concrete support piers. The 2250s also endured shifting seasons to complete the project, ranging from heavy snow in February to excessive heat in July.