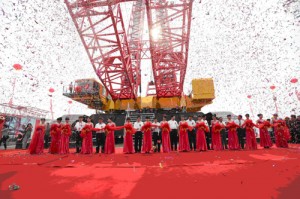 Until now it has been widely assumed that construction equipment made by Chinese companies, and even equipment made in China by the leading foreign firms, was inferior in both quality and technology to gear produced in the foreign firms’ factories back home. These assumptions have been crushed by a new study from CLSA, a broker, which tested a range of Chinese-made diggers, and found them to be sturdy and high-performing. Leading Chinese brands like Sany, Zoomlion and LiuGong, whose products also have the advantage of being cheap, will soon be invading building sites across the globe.

Things have changed drastically since the global financial crisis five years ago. Until then, around 90% of the diggers on Chinese building sites were foreign-branded, albeit often made inside the country. The government’s huge fiscal stimulus, in 2008-09, triggered a construction boom which encouraged existing Chinese makers to expand, and dozens of new firms to enter the market. The local firms lacked the technical know-how of Japan’s Hitachi and the extensive product range of America’s Caterpillar. But they offered buyers such generous discounts and financing that by 2011 they had grabbed half of the domestic market.

As they have expanded, the best Chinese firms have rushed to upgrade their technology by buying, or entering joint ventures with, foreign competitors and suppliers. Sany Heavy bought two German firms, Putzmeister and Intermix, and entered a joint venture with Palfinger of Austria. Zoomlion bought CIFA of Italy. LiuGong and Xugong formed joint ventures with, respectively, America’s Cummins and South Korea’s Doosan, to improve their diesel engines.

As the effect of the government’s stimulus has faded, demand for construction equipment has softened. So the foreign firms, which had hitherto been producing relatively low-tech “made in China for China” products in their local factories, have increasingly switched to making more sophisticated ones for export, in particular to South-East Asian countries.

CLSA’s researchers subjected Chinese-made diggers from six companies—Sany, Caterpillar, Hitachi and Doosan, as well as Komatsu and Kobelco of Japan—to two weeks of gruelling tests of their productivity, durability and fuel efficiency. They all came out well, but most striking was the performance of Sany’s machines. Though not quite as good as the best, made by Caterpillar, they outperformed their Japanese and Korean rivals. CLSA concluded that technology gaps between the best Chinese firms and their foreign rivals are now “almost non-existent”. It expects that Sany and a handful of other larger Chinese brands will lead a consolidation of the local industry, in which 60 firms will become perhaps six.

CLSA’s test makes an interesting contrast with a similar exercise in February, in which Sanford C. Bernstein, a research firm, stripped down two leading models of Chinese-branded car, to examine their build quality. In this case the Chinese firms were still found to be lagging their foreign rivals. So Chinese companies have not yet learned how to make world-class cars, but they have now cracked how to make top-quality construction equipment at attractive prices—and their foreign rivals should be worried.