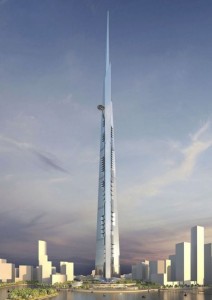 Tower cranes are being installed in what will be the world’s first building to reach – and exceed – 1,000 metres.

Construction on the Kingdom Tower in Jeddah, Saudi Arabia, began earlier this year, and at over a kilometre high it will dwarf the current highest building – the 828 metre high Burj Khalifa.

The three 280 HC-L will be anchored to the outer sides of the building on several cantilevered platforms, and reach hook heights of around 400 metres, while the 357 HC-L will climb all the way to the top, possibly creating a new record for the highest crane.