This page on cranes blog is about tower crane. In these tower crane blogposts you find news on all tower cranes.

Chinese tower crane manufacturer Yongmao has sold ten cranes to Singapore crane sales and rental house Erect Group, for an end user in Myanmar. The SGD3m (USD2.39m) deal will see Yongmao deliver 10 of its STT cranes through 2014-2015. It follows the manufacturer's first sale in the country (also commonly known as Burma) at the start of this year. As Myanmar democratises and its economy opens up from years of sanctions and restriction, companies like Yongmao are seeing new opportunities. Yongmao executive director and group general manager … END_OF_DOCUMENT_TOKEN_TO_BE_REPLACED 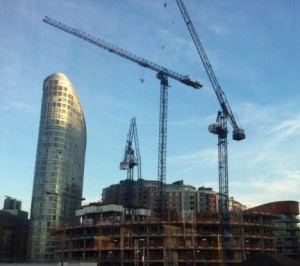 Two tower cranes collided over Canary Wharf in London, UK today seriously injuring a 35 year old man. A flat top Yong Mao saddle jib tower crane was set up over the top of a Jost hydraulic luffing jib crane, and we are told that the jib of the higher crane was low enough to strike the luffer which had its jib in the out of service position. Subsequent reports have confirmed that the injured man, was the operator of the Jost crane, which is owned by LTC (London Tower Crane service). We understand that the man suffered lacerations to his … END_OF_DOCUMENT_TOKEN_TO_BE_REPLACED 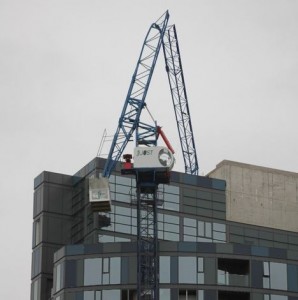 Following the recent collapse of three luffing jib tower cranes during high winds the UK’s Health & Safety Executive (HSE) has issued a safety alert relating to tower cranes. The alert is intended for tower crane operators and serves as a reminder that any luffing jib cranes left unattended in the out of service condition must be in free slew with the jib at a safe out-of-service radius. It also states that operators must ensure they have the most accurate, up to date information from the supplier or manufacturer, as some manufacturers … END_OF_DOCUMENT_TOKEN_TO_BE_REPLACED 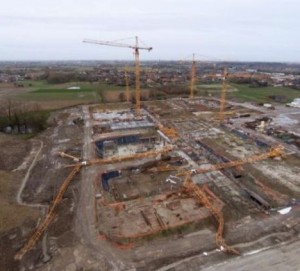 A heavy storm in northern Belgium on Saturday took down two tower cranes at the site of a new hospital in Oekene, Roselare. The foundations/base of the cranes, which appear to be traditional Liebherr top slewers, look to have been the weak point with both going over fully intact. Four other similar cranes on site survived the storm intact. The storm also severely damaged over 20 homes and a large tract of greenhouses. The foundations of the two cranes appear to have given way in the face of the storm. … END_OF_DOCUMENT_TOKEN_TO_BE_REPLACED 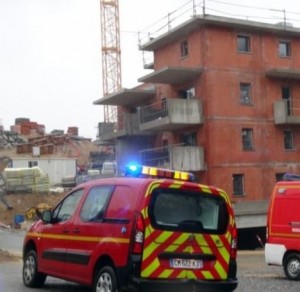 Four men on a building site in France were shocked and burnt yesterday morning after a bolt of lightning hit a tower crane in Saint-Jean-de-Luz just South of Biarritz in the South West of the country. Two of the four men are seriously injured and were rushed to a hospital in Beyonne while the other two were treated in the local hospital. The crane operator, 30 metres up in his cab, was uninjured in the incident, although somewhat shocked. He described the event as a massive ball of fire and a huge noise which rocked the crane as it ran … END_OF_DOCUMENT_TOKEN_TO_BE_REPLACED 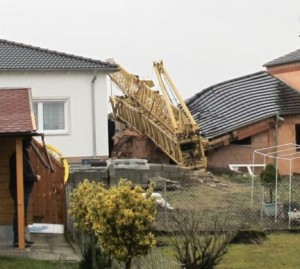 An operator dismantling a self-erecting tower crane in Germany is said to have made an error that resulted in the crane overturning at a site in Osterhofen Bavaria. Thankfully on one was hurt in the incident which occurred on Friday The tower of the crane went over the back of the counterweight and landed on a garage completely demolishing it. Two houses either side were reportedly untouched. The crane was supplied from the rental fleet of Kaiser Baumaschinen, which dismantled and carted it away yesterday. A police statement clearly … END_OF_DOCUMENT_TOKEN_TO_BE_REPLACED