This category is about Manitowoc cranes. In these Manitowoc blogposts we will inform you on the crane brand Manitowoc.

A Manitowoc MLC165 heavy-duty crawler crane has been sold into the Mexican market for the first time, to service the country’s growing petrochemical industry. The 165t crane was purchased by rental company Grúas Villarreal for the Ethylene XXI plastic production project, set to begin in early 2015 and due to produce more than 1m t of polyethylene annually. General manager Cynthia Villarreal said: "We know we can depend on Manitowoc cranes for complex projects such as the Ethylene XXI. The MLC165 was the best candidate because it's a crane … END_OF_DOCUMENT_TOKEN_TO_BE_REPLACED 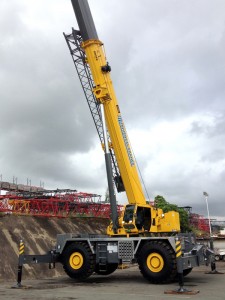 Australian crane company Universal Cranes is using two 120t Grove RT9130E-2 rough terrain cranes to build an on-shore LGN (liquefied natural gas) facility in Darwin, northern Australia. The cranes, which are regularly operating with their full boom length of 48m, arrived at the construction site at the start of 2014 after being transported 3,500km across the country. They will continue installing an underground network of piping and equipment for at least the next two years, working for Leighton Contractors. The development, which is now … END_OF_DOCUMENT_TOKEN_TO_BE_REPLACED

Crane Rental Corporation, based in Orlando, Florida, has further expanded its fleet with the purchase of five cranes. The company added a 275t Manitowoc 999 crawler crane; a 230t Link-Best LS-298 crawler; two 130t Grove RT9130E hydraulic rough-terrain cranes; and an 80t Grove RT880E hydraulic rough-terrain crane. The move was made in response to "increasing demand in almost every sector of our industry", said company president Alan Ashlock. Crane Rental had already expanded its fleet this year, purchasing cranes including a Peiner … END_OF_DOCUMENT_TOKEN_TO_BE_REPLACED 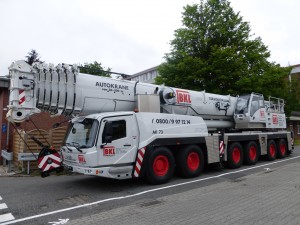 German crane rental company BKL Baukran Logistik has added a second Grove GMK6300L all terrain crane to its fleet. Manufactured by Manitowoc, the first 300t GMK6300L purchased by BKL completed 1,500 working hours in a year, leading to the German company's addition of a second unit. The GMK6300L is based in Frankfurt and is used primarily for inner-city job sites where space is limited, and for erecting and dismantling tower cranes. Based at Forstinning, near Munich, BKL has a fleet of more than 330 tower cranes and almost 40 mobile … END_OF_DOCUMENT_TOKEN_TO_BE_REPLACED

A 300t Grove GMK6300L all terrain crane has been used to install five air handling units on the roof of a nine-storey building at London’s Great Ormond Street Hospital. UK-based City Lifting lifted the 4t units at a radius of 54m using only the crane's main boom, as the limited space in central London prevented the company from rigging a fly jib. To reach the site of the children's hospital the crane also had to navigate a hole which had been dug in the adjoining access road. The lifts, which represented the first time City Lifting had … END_OF_DOCUMENT_TOKEN_TO_BE_REPLACED 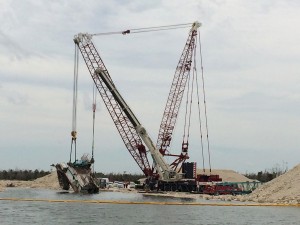 A Manitowoc crane that slipped off a bank into 70ft of water has been successfully rescued by Florida-based Crane Rental Corporation (CRC) in a tandem lift. CRC used a Manitowoc 2250 crawler crane with MAX-ER attachment (500t capacity) and a 600t Terex AC 500-2 hydraulic truck crane to lift the submerged Manitowoc 4600 dragline. The total weight lifted was 484,000 pounds. CRC had to supply pre-lift plans and submit them to the Mining Safety and Health Administration for approval. It also supplied a lift director, skilled riggers and … END_OF_DOCUMENT_TOKEN_TO_BE_REPLACED 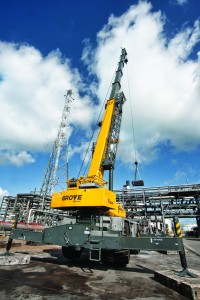 A new fleet of Grove rough-terrain cranes is helping one of Peru’s largest copper mines to triple its production output. The Gove RT9130Es, RT880Es and RT765E-2s were assembled at Manitowoc's factory in Passo Fundo, Brazil and supplied to Graña y Montero Holdings' (GyM) copper and molybdenum mi ning complex in southern Peru. The units are assisting the company with the US$4.6bn mine expansion project, which will enable GyM to expand output from 120,000t to 360,000 per day, providing additional annual production of 272,000t of copper and … END_OF_DOCUMENT_TOKEN_TO_BE_REPLACED

A USITC has issued a final initial determination in Manitowoc's complaint against Sany, saying that the American crane manufacturer has shown certain products infringe its patents, and that they have shown misappropriation of trade secrets. The case relates to the two companies' competing floating counterweight systems. Manitowoc claims that Sany's system used on its SCC8500 infringes on a patent, US 7,546,928, relating to a mobile lift crane with variable position counterweight. The system was implemented by Manitowoc on its Model 31000, … END_OF_DOCUMENT_TOKEN_TO_BE_REPLACED

Two Manitowoc crawler cranes and a Link-Belt crawler have completed a 15-week lifting job on a new six-storey car park at Florida International University. Crane Rental Corporation provided two 300t Manitowoc 2250 crawlers and a 200t Link-Belt HC-248H5 for the project, which involved lifting more than 2,600 prefabricated concrete components. The heaviest component was a 74,000-pound shear wall. The Manitowoc cranes had 100ft of main boom and 100ft of luffing jib, while the Link-Belt worked with 200ft of main boom. The 2,400 space car … END_OF_DOCUMENT_TOKEN_TO_BE_REPLACED