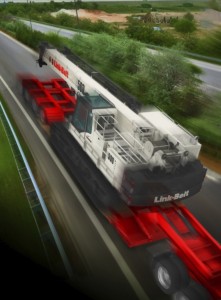 Link-Belt Construction Equipment is showing its seriousness about growing its share of the market for telescopic crawlers. The company will get a lot of attention with its latest offering in the tele crawler line, the all-new 50 US ton (45 metric ton) capacity TCC-500, which has already been built and tested at the Lexington plant and will be shown at ConExpo in Las Vegas in March. It is the third crane in Link-Belt’s tele crawler line and it’s a solid piece of equipment that will engage companies in the power utility industry, especially, … END_OF_DOCUMENT_TOKEN_TO_BE_REPLACED 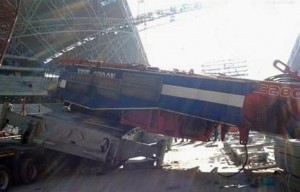 A 600 tonne crawler crane slipped off a truck yesterday, while being loaded in Singapore, fortunately no one was hurt in the incident. The crane a Terex CC2800 owned and operated by local heavy lift and crane rental company Yew Choon. It had just finished work at the new National Stadium in the Kallang area of Singpaore, where it had been helping install the stadium roof structure. It looks as though the slew lock was not activated and that the superstructure swung over the side as the loading jacks were retracted which probably caused … END_OF_DOCUMENT_TOKEN_TO_BE_REPLACED 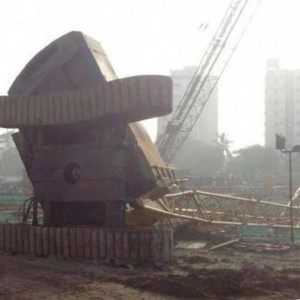 One man died and another was injured when a crawler crane overturned at a metro construction site in Saidapet, Chennai, India on Saturday. The crane was said to be lifting a 25 tonne counterweight and was slewing to load it onto a trailer when it overturned. The boom landed on welder Ranjith Biswal, 20, killing him outright, while Tira Nayak, 19, was trapped by his leg and was taken to hospital with a serious fracture which has resulted in the leg being amputated. Work has been suspended while an investigation looks into the cause for the … END_OF_DOCUMENT_TOKEN_TO_BE_REPLACED 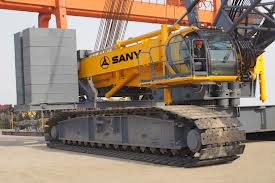 SANY America’s new 550 U.S. ton crawler crane will satisfy a niche between 440- and 660-ton machines and is ideally suited for construction of wind energy towers, fossil fuel plants, nuclear facilities, petrochemical installations and a variety of infrastructure projects. The SANY SCC8500 has a host of exclusive and in-demand features to meet the needs of customers in a range of applications. It was first displayed at the Bauma China trade show in late November. “Customers told us the 500-ton machine is badly needed to fill a niche between … END_OF_DOCUMENT_TOKEN_TO_BE_REPLACED