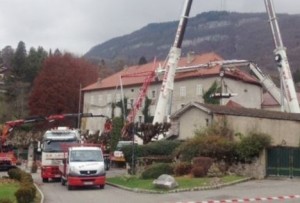 A self-erecting mobile tower crane overturned onto the roof of a famous hotel/restaurant in France on Monday, after one of its outriggers punched through the tarmac drive into an underground void.

Thankfully no one was hurt in the incident and the crane operator was well away from the crane at the time, operating it via the remote controls, which is just as well, as it looks as though the elevating operators cab took most of the impact and was buried in the roof.

We do not know if mats were used to spread the load on what are clearly uncertain ground conditions, with a strong likelihood of voids. The other photos we have seen suggest that some basic cribbing was employed.

The crane a Liebherr MK owned by local crane company S.E Levage, was working on the refurbishment of the historic Abbaye de Talloires on Lake Annency, in the Haute Savoie region of France. The establishment has been closed since November for a major refurbishment which included work on the roof which had only recently been completed.

When the crane’s fall was stopped suddenly, the tower buckled and crashed into the roof, while the jib came down into the car park. The crane company quickly arrived on the scene and using an integrated loader crane platform to reach the jib cut it free from the tower, before tackling the tower.